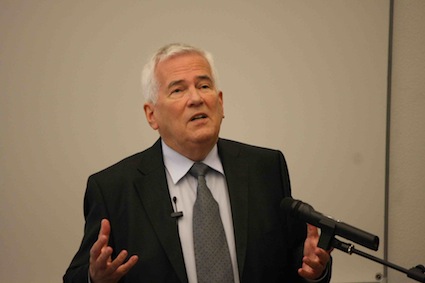 RNH organised an international  conference on “Fisheries: Sustainable and Profitable” Saturday 6 October 2012 at the University of Iceland, a part of the joint RNH-AECR project “Europe, Iceland and the Future of Capitalism”. Keynote speakers included the chief fisheries specialists of FAO, OECD and the World Bank, and three Icelandic internationally renowned specialists on fisheries: Arni Mathiesen, FAO, Gunnar Haraldsson, OECD, and Michael Arbuckle, World Bank, and Professors Ragnar Arnason, Rognvaldur Hannesson and Thrainn Eggertsson. Brian Carney, a member of the editorial board of the Wall Street Journal, and Dr. Michael De Alessi, an expert on marine technology, also participated in the programme. Mrs. Rakel Olsen who runs a a fishing company in Stykkisholmur opened the conference, and it was closed by Mrs. Gudrun Larusdottir who runs a fishing company in Hafnarfjordur. More information about the programme is here, and about the participants here.

Thrainn Eggertsson tried, in his paper, to explain the opposition to the very successful and efficient Icelandic ITQ (individual tradable quota) system in the fisheries. He distinguished between the ideologists and materialists in the opposition and argued that the collapse of the banking sector in 2008 had rejuvenated the resentment of the wealth generated in the fisheries. Ragnar Arnason presented evidence and arguments  to the effect that the whole Icelandic nation benefited in many indirect ways from profitable fisheries, even if the holders of ITQs were not too numerous. About half the rent captured in the fisheries ended up with government already, in one way or another. Rognvaldur Hannesson and the other lecturers at the conference all agreed that an ITQ system like the present one in the Icelandic fisheries was the best solution in Iceland, while other kinds of system might apply elsewhere, for example TURFs, territorial use rights in fisheries. 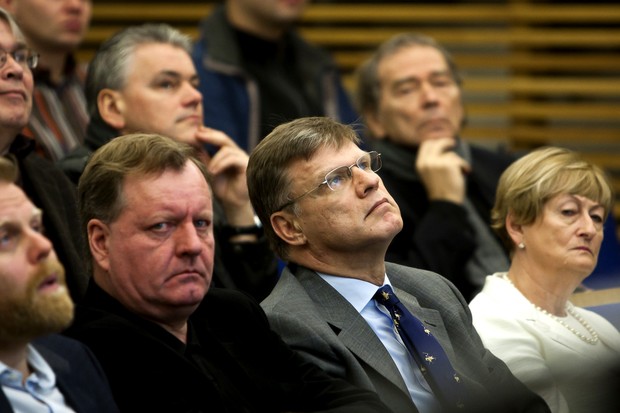 The conference was well-attended and generated much media attention. Morgunbladid printed an interview 6 October with two of the lecturers, Dr. Gunnar Haraldsson and Professor Thrainn Eggertsson, who lamented the changes which the present Icelandic government is trying to force through on the well-functioning system of ITQs (individual transferable quotas) in the Icelandic fisheries. That same evening, Thrainn Eggertsson also appeared in the newshour of the television station, Stod tvo. Brian Carney wrote an editorial in the Wall Street Journal 9 October on the political threat to the ITQ system. He considered it almost suicidal if the present Icelandic government would for populist reasons impose inefficient changes on the system which had contributed so much to Iceland’s recovery. Morgunbladid printed an interview 11 October with Professor Ragnar Arnason and an interview 12 October with Professor Rognvaldur Hannesson who said that one should not kill the goose that laid the eggs of gold, as seemed to be the intention of the present Icelandic government. Vidskiptabladid also gave 13 October an account of of the conference.