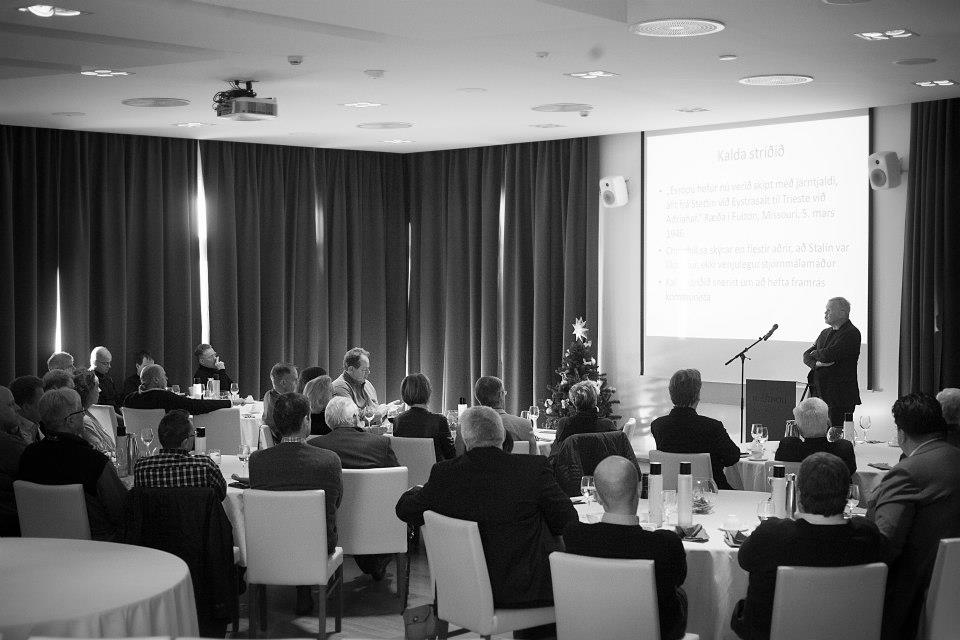 Professor Hannes H. Gissurarson gave a talk about “Winston Churchill the Statesman” at a luncheon meeting of the Icelandic Churchill Club Saturday 17 November. He pointed out that Churchill was firmly planted in the Anglo-Saxon tradition of liberty under the law, whose noblest achievements were the 1688 Bloodless Revolution in England and the 1776 American Revolution: their aim had been to circumscribe power and to ensure individual rights. Professor Gissurarson discussed some of the most famous quotations attributed to Churchill and traced them to other sources. A legend in his own lifetime, Churchill was often misquoted.

According to Professor Gissurarson, the rise of Hitler, opposed by Churchill, was certainly resistible. Machiavelli had said that in the fight against the wolves, the statesman had to possess the strength of the lion and the cunning of the fox, and these two qualities Churchill had combined: he had also recognised the wolves, Hitler and Stalin, for what they were. Another topic discussed by Professor Gissurarson was the British Empire. While it could be criticized for much, it should not be forgotten that it brought the rule of law to many countries. Often it was vastly better than the alternatives, either cruel domestic despots, or the Japanese and German Empires which competed with it in the 20th Century. When the British left India, it was partitioned in a bloody way, with tens of millions of people losing their homes. Did the Indian elite then rule the country better than the Raj? It was interesting that the inhabitants of Hong Kong did not want to part with British rule in 1997. Finally, Professor Gissurarson discussed the episode in the election campaign of 1945 when Churchill, under the influence of F. A. von Hayek, warned against central planning: But the British electorate was not ready for that message.