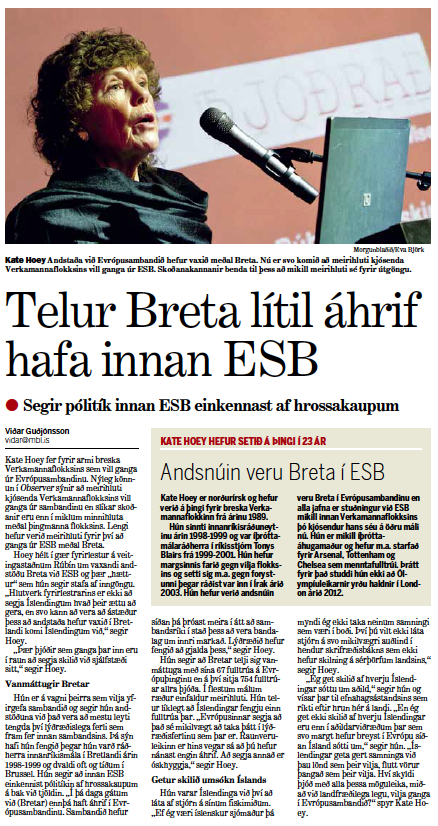 Ms. Kate Hoey, Labour MP for the London district of Vauxhall, gave a talk at a well-attended meeting of Icewise on the “Dangers of Joining the EU” Monday 19 November. She said that the British people were fed-up with EU membership. A small elite in Brussels, out of touch with ordinary Europeans, was steadily increasing its power. It was for her incomprehensible that the Icelanders wanted to join, at the same time as opinion polls showed that almost 65% of the British wanted to leave the union. If the Icelanders joined the EU, they would have to be very concerned about their fisheries. The British felt powerless with their 67 delegates to the European Parliament, and as a member state Iceland could expect to get one delegate. Ms. Hoey also said that in the United Kingdom there was widespread support for a referendum on EU admission. “Let us no longer be Little Europeans. Let us instead be real internationalists,” she added. The leading daily Morgunbladid published 20 November an account of her talk, and published a taped interview with her on its website.

Here, Kate Hoey’s talk can be accessed on Youtube, as well as the introduction (in Icelandic) by Skafti Hardarson and concluding remarks by Hallur Hallsson and Jon Kristinn Snaeholm (also in Icelandic). While RNH did not organise this event, it fully supports it as a part of the joint project with AECR on “Europe, Iceland and the Future of Capitalism”.