Booth: Regulation the Problem, Not the Solution 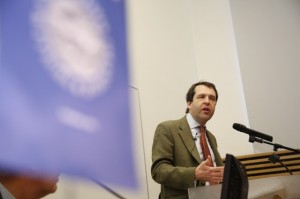 In a lecture at the University of Iceland 13 March 2013, sponsored by the School of Business at the University of Iceland, and by RNH, Professor Philip Booth of Cass Business School and the London IEA discussed the causes of the 2008 international financial crisis. It was widely believed, according to Professor Booth, that the crisis was caused by capitalism, especially the greed of bankers, and that consequently financial markets had to be more closely regulated and monitored. Professor Booth argued however that this was a great over-simplification. One cause of the crisis was unsustainable mortgage lending in the US, to individuals belonging to designated minority groups, but with no proven ability to meet their obligations, often even without registered assets or regular jobs; this was encouraged, and sometimes enforced, by government. Another cause was the lax monetary policy of the American central bank, the Fed, under Alan Greenspan, after 2001, in an unfounded fear of stagnation after the dotcom crisis. In the first few years of the new century, international financial markets were full of cheap money, and finally the bubble had to burst. 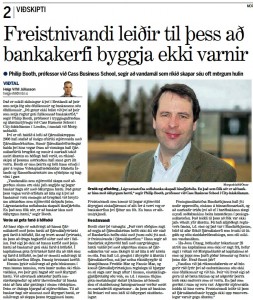 There were however two basic systemic causes of the crisis, Professor Booth argued. One was the moral hazard of the “Too Big to Fail” approach. Bankers knew that in good times, the profits were theirs to enjoy, whereas in bad times, the losses would almost always be transferred to the taxpayers. Government did not even charge the banks for, in effect, insuring deposits. Recklessness did therefore pay. The other systemic cause of the crisis was that uniform rules on assets, equity ratios and risk estimates, had been imposed internationally on commercial banks, with the unintended consequence that the risk for individual banks may have been reduced, while the risk to the whole system, given a possible flaw in the structure, had been increased.

Professor Booth expressed doubt about proposals to increase regulation in the financial sector, saying that a better way of dealing with risk was to maintain several types of banks, competing for customers, surviving if well-run, failing if badly run, but without bringing down others. The most important task ahead was to change the framework in finance in such a way that banks could fail individually, instead of taking either government or their competitors hostage, in the fear of banks failing collectively. Professor Booth added that it seemed sensible to give deposits priority over other claims on banks which should imply that providers of capital to the banks would become more cautious. He also suggested that present rules about taxing bank equity and bank debt very differently should be changed in order to reduce risk. 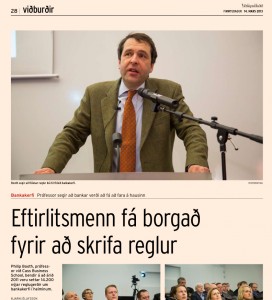 The lecture was well attended, with a lively discussion following it, moderated by Professor Ingjaldur Hannibalsson, president of the Icelandic School of Business. Skafti Hardarson, chairman of the Icelandic Taxpayers Association, asked whether the idea that central banks should be lenders of last resort made any sense. Professor Booth replied that the best proposal he had seen on this issue was that banks should be free to choose whether or not to be supervised by a central bank. Should they choose to do so, the central bank would undertake to be their lender of last resort. But if they did not want to participate in such a scheme, they would be neither supervised nor supported by the central bank. Professor Stefan Olafsson asked Professor Booth whether he concluded, on the basis of research done by Reinhart and Rogoff, that the crisis was caused by deregulation. Professor Booth replied that regulators did not possess perfect information or the right incentives to control banks. There was, he pointed out, no clear causal connection between the lack of regulation and instability. For example, in the third quarter of the 20th Century, English banks operated under very light rules, not even having deposit insurance. Nevertheless, they were quite stable.

This event, which formed a part of the lecture series jointly organised by RNH and AECR, Alliance of European Conservatives and Reformists, on “Europe, Iceland and the Future of Capitalism”, was widely reported in the media. The daily Morgunbladid gave an account of the lecture 14 March. Vidskiptabladid, a business weekly, also reported on the lecture 14 March, and on its website an interview with Professor Booth, taped after the lecture, can be watched. Vidskiptabladid also wrote an editorial quoting approvingly Professor Booth’s analysis of the financial crisis. Professor Stefan Olafsson wrote a blog about his experience at the meeting. Professor Booth’s talk in Iceland can be watched here on Youtube.