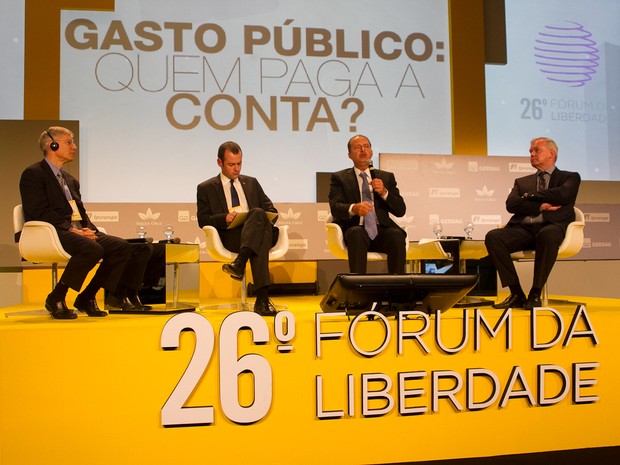 Professor Hannes H. Gissurarson, University of Iceland and RNH, gave a paper at the conference Fórum da liberdade in Porto Alegre 9 April 2013. The title of his paper was “Making the Invisible Hand Visible: Reflections on the Political Economy of Freedom”. According to Professor Gissurarson, the biggest news in the early 21st Century was not the financial crisis in the West, but rather the fact that big countries like Brazil, Russia, India and China had entered the world economy and established capitalism, however imperfect, in their economies, with a corresponding rapid economic growth. This was a challenge to the North American and European countries. Professor Gissurarson said that the goal was not to maximize the tax revenues of government, as some proponents of the Laffer Curve thought, but rather to maximize economic growth by keeping taxes low, for example at the same level as in Switzerland, which, incidentally, had about the same tax revenue per capita as Sweden, about $25,000, but with much lower tax rates, 28% of GDP instead of 44%. To demonstrate how important economic growth was to well-being and living standards, Professor Gissurarson showed a graph of the different paths taken by Argentina and Australia since 1929 and their results in terms of GDP per capita: the Argentinians, under the spell of despots and demagogues, were busy trying to redistribute wealth, whereas the Australians were more concerned with creating wealth.

Sharing the panel with Professor Gissurarson were Dr. Yaron Brook from the Ayn Rand Institute in Irvine, California, and Eduardo Campos, governor of Pernambuco and widely seen as the next presidential candidate of Brazil’s Socialist Party. Other lecturers at the conference included José Mariano Beltrame, director of security in Rio de Janeiro, Professor Randy T. Simmons, author of several books about public choice, Jorge Gerdau, one of the most influential businessmen in Brazil, Paulo Kakinoff, director of the airlines GOL, and Alexandre Tombini, governor of Brazil’s Central Bank. João Robert Marinho, one of the directors of the Globo media company, received a medal for his energetic defence of freedom of expression in Brazil.

IEE (Instituto Estudos empresariais), an association of young entrepreneurs and businessmen in Porto Alegre, organised the event, which was attended by about four thousand people. The theme was from French writer Frédéric Bastiat on what is seen, and what is unseen in political economy. Here is Gissurarson’s speech:

The discussion in the panel was described in the website journals Voto and Agenda 2020. Gissurarson’s lecture was a part of the joint project by RNH and AECR, the Alliance of European Conservatives and Reformists, on “Europe, Iceland and the Future of Capitalism”. During the conference, he used the opportunity to discuss possible future lectures in Iceland by Dr. Yaron Brook on Ayn Rand’s life and works, in special connection with the publication of the novel We the Living, Professor Randy T. Simmons on public choice theory and endangered species, and Professor João Carlos Espada on the Anglo-Saxon Tradition of Liberty.