Mrs. Margaret Thatcher, Baroness Kesteven, Prime Minister of the United Kingdom in 1979–1990, will have a state funeral in London Wednesday 17 April 2013. Thatcher was protector of AECR, the Alliance of European Conservatives and Reformists, which works jointly with RNH on two projects, “Europe, Iceland and the Future of Capitalism” and “Europe of the Victims: Remembering Communism”.

Thatcher was strong as a lion and cunning as a fox, which is indeed how Machiavelli thought efficient political leaders had to be. Her firmness and willingness to fight for her principles evoked mixed reactions in that group of respectable, middle-aged men in grey suits and with ties, who occasionally met at the time and spoke in the name of Europe. “Mrs. Thatcher! She has the eyes of Caligula and the lips of Marilyn Monroe,” French President François Mitterand once exclaimed to his Minister of European Affairs, Roland Dumas. 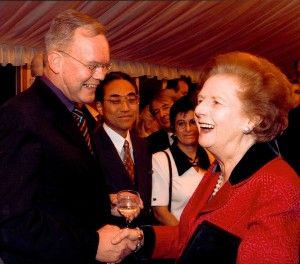 Professor Hannes H. Gissurarson of RNH Academic Council speaks to Margaret Thatcher at a reception she gave in the House of Lords.

Thatcher herself once said to the RNH academic director, Professor Hannes H. Gissurarson, at a dinner they were attending: “The problem with the politicians on the continent is that they have never understood the Anglo-Saxon tradition of liberty under the law.” From the time King John Lackland had to sign the Magna Charta in 1215, there has been a strong movement in England to constrain the Sovereign’s power, a movement no less vigorous after the Public had replaced the King as Sovereign. In England, law is supposed to impose limits on both the rulers and the ruled, in the service of individual liberty.

French military leader Napoleon spoke contemptuously of the English being a nation of shopkeepers. But in the Second World War this nation of shopkeepers saved the countries on the European continent from themselves. And even if the politicians on the continent did not perhaps fully understand the Anglo-Saxon tradition of liberty under the law, the leader of the 19th Century Icelandic Independence Movement, Jon Sigurdsson, firmly shared Thatcher’s view. “Many of the wisest men who have written on the political arrangements in England, analysing them thoroughly, regard freedom of enterprise as the main source of progress there,” Jon Sigurdsson wrote in Ny felagsrit 1844.

It was however The Red Star, magazine of the Russian Red Army, which gave the name “Iron Lady” to Thatcher. Characteristically, she relished in the name, and said in a speech in her constituency, Finchley, 31 January 1976: “The Iron Lady of the Western World? Me? A cold war warrior? Well, yes — if that is how they wish to interpret my defence of values and freedoms fundamental to our way of life.” It was then Thatcher’s fate, and destiny, to win the Cold War, in close cooperation with President Ronald Reagan of the United States.

British Prime Minister David Cameron paid tribute to Thatcher in a special meeting of the House of Commons 12 April 2013: