Two members of the RNH Academic Council gave lectures at the board meeting and conference of AECR, Alliance of European Conservatives and Reformists, in Reykjavik 9–12 May 2013. Professor Ragnar Arnason spoke about the utilisation of natural resources, arguing that, whenever possible, it was most efficient to develop private property rights or exclusive use rights to such resources, in effect creating custodians of them. The Icelandic system of individual transferable quotas, ITQs, in the fisheries was efficient, according to Professor Arnason, because the quota-holders had an interest in minimizing the cost of their fishing effort. The general public also gained indirectly from this. Arnason criticized the CFP, Common Fisheries Policy, of the EU, European Union, for being both inefficient and unjust.

Professor Hannes H. Gissurarson gave an account of the main events organised by RNH, in cooperation with AECR, in the preceding fifteen months, including two international conferences, one on the victims of communism, the other one on sustainable and profitable fisheries, and many individual lectures, given by well-known writers and academics such as Dr. Matt Ridley, the 5th Viscount Ridley, Ms. Anna Funder, Professor Bent Jensen, Professor Douglas Rasmussen and Professor Philip Booth. Professor Gissurarson mentioned some forthcoming events, such as a photo exhibition on communism in the National Library of Iceland, a seminar on Mrs. Margaret Thatcher, a party on the occasion of the publication of an Icelandic translation of We the Living by Ayn Rand, and a conference on capitalism and the use of natural resources in the memory of Professor Arni Vilhjalmsson, a leading Icelandic scholar and entrepreneur. Professor Gissurarson also showed the audience a video on RNH which is accessible on Youtube. 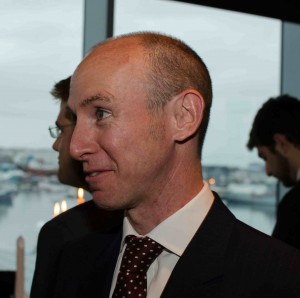 Daniel Hannan at dinner, enjoying the view from Harpa.

Bjarni Benediktsson, chairman of the Independence Party, Iceland’s conservative-reformist party, gave a talk at a special AECR dinner. Other Icelandic speakers at the conference were MPs Hanna Birna Kristjansdottir, Gudlaugur Thor Thordarson, and Ragnheidur Elin Arnadottir; they informed the foreign guests about the political situation in Iceland and about the position of the country in today’s world. Other speakers at the conference included Rich S. Williamson, former US Ambassador to the UN and an advisor on international affairs to Republican presidents. The chairman of AECR is MEP Jan Zahradil from the Czech Republic, and the general secretary is a long-time friend of Iceland, MEP Daniel Hannan, from the United Kingdom. A tape where he criticized Labour leader Gordon Brown has been viewed by almost three million people on Youtube.