A seminar was held in Warsaw 14–15 May 2013 on how best to remember and honour the victims of 20th Century totalitarianism, both Communism and Nazism. Scholars estimate that Communism cost about 100 million lives, and Nazism about 20 million lives. The seminar was organised by the Platform of European Memory and Conscience, PEMC, in cooperation with The Museum of the Warsaw 1944 Uprising, MPW, The Polish Institute of National Remembrance, IPN, and the Czech Institute for the study of totalitarian regimes, USTR. Professor Hannes Gissurarson participated in the seminar, the research project on “Europe of the Victims” being a joint effort of RNH and AECR, Alliance of European Conservatives and Reformists.

Göran Lindblad, former Swedish MP and President of PEMC, opened the seminar. He led the successful effort in the European Council in 2006 to declare 23 August a special day of remembrance for the victims of Nazism and Stalinism; on this day, in 1939, Hitler and Stalin signed their non-aggression pact making war in Europe possible and enabling the two dictators to divide between them Central and Eastern Europe. 2009, the European Parliament accepted a resolution in the same spirit. Lindblad had indeed given a talk in Iceland 31 August 2009 when an Icelandic translation of The Black Book of Communism was published. 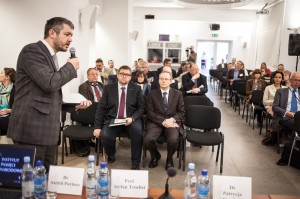 Speakers at the Warsaw seminar included Dr. Neela Winkelmann, director of PEMC, Professor (Emeritus) Gundega Michele, director of the Museum of the Occupation of Latvia 1940–1989, Dr. Andreja Valic Zver, director of the Study Centre for National Reconciliation in Slovenia, and  Uve Poom, director of the Unitas Foundation in Estonia, established by Mart Laar. Dr. Winkelmann described the development of a illustrated textbook for grammar schools or senior high schools on the totalitarian experience, with collected stories about Nazism and Communism from different  countries, with an acompanying CD containing documentary films and reviews. Professor Adam Daniel Rotfeld, former Foreign Minister of Poland, closed the seminar with reflections about the Polish-Russian relationship.

Many difficult and sensitive issues were raised at the conference, such as when victims become perpetrators, and oppressed minorities turn into oppressing majorities, in the complex course of events in 20th Century Central and Eastern Europe; and what is the real and clear meaning of the words “Genocide” and “Crimes against Humanity”; and whether it is appropriate to reserve use of the designation the “Holocaust” only for the Nazi conscious decision and attempt to exterminate all Jews in Central and Eastern Europe or whether other atrocities should be included, such as the mass-starving by Stalin of the Ukrainian peasantry in the 1930s, or Tibet under Chinese communist rule, or Cambodia under Pol Pot. On the agenda was a visit to the Warsaw Museum of the 1944 Uprising, with a display of a film made about the city in 1945 when the Nazis, especially the SS, had almost razed the city to a ground and killed most of the immigrants, as well as the Polish freedom fighters. Meanwhile, in the crucial months of August and September 1944, the Red Army under Stalin had sat without doing anything except looking at the atrocities at the other side of Vistula, the river running through Warsaw. The film on Warsaw after the uprising can be watched on Youtube:

Also, a film on Warsaw in 1939 when it was regarded as one of the most beautiful cities in Europe and called “Little Paris” can also be seen on Youtube:

All participants were given a book put together by the Polish Institute of National Remembrance about the massacre in the Katyn woods in 1941, where Stalin sought to eliminate the Polish elite by killing it, especially officers in the Polish Army, and then blaming the mass murders on Hitler.