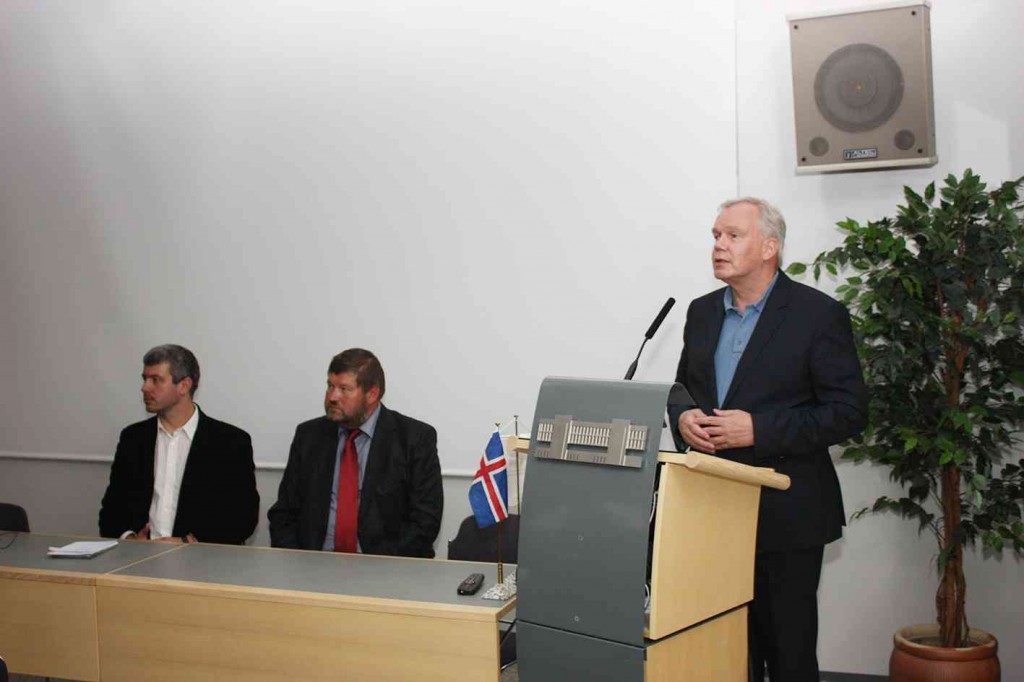 A photo exhibition, a part of the RNH-AECR joint project on “Europe of the Victims”, was opened at the National Library of Iceland 23 August 2013, the day designated by the European Parliament to be a Remembrance Day for the victims of totalitarianism. On this day, in 1939, Hitler and Stalin made the non-aggression pact which divided Central and Eastern Europe up between them and which started the 2nd World War. The exhibition is called “International Communism and Iceland”, with photographs from a recent book by Professor Hannes H. Gissurarson on the Icelandic communist movement 1918–1998. Olafur Engilbertsson and Sogumidlun were in charge of design.

At the opening ceremony, two guests from Central and Eastern Europe spoke. Dr. Mart Nutt from Estonia told the story of a small nation under Soviet yoke, suffering oppression and russification. Dr. Pawel Ukielski gave an account of the 1944 Warsaw Rising which the Nazis suppressed with extreme cruelty, while Stalin found it convenient to keep his army idly waiting at the other side of the Vistula River running through Warsaw. The audience intently watched the sometimes shocking images shown during his talk.

In an online interview with Vidskiptabladid, a weekly business magazine, Ukielski pointed out that the 2nd World War was not fought only between the West and the Nazis. The first two years of the War, Stalin and Hitler were allies, even if Stalin did not participate in the War. With the 1939 non-aggression pact they jointly assumed control of Central and Eastern Europe and did not become enemies until Hitler attacked Stalin in June 1941. 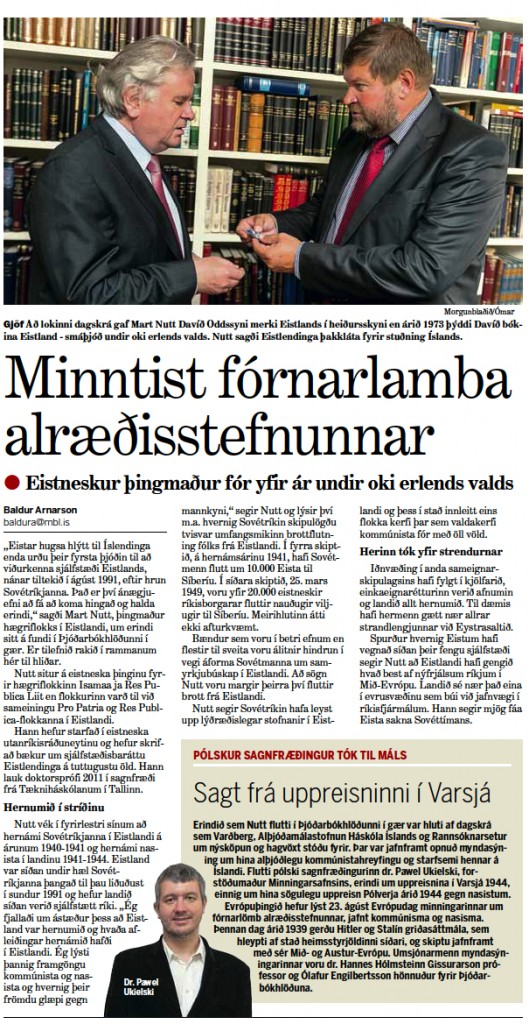 In an interview with the Icelandic government television channel, broadcast in the evening of 23 August, Nutt recalled that he had participated in the “Baltic Way” on 23 August 1989, when more than two million people had held hands and formed a living chain, from Tallinn to Vilnius, to demonstrate their will to see the Baltic states independent and free. In an interview with Morgunbladid 24 August, Nutt said that the Estonians were grateful for the sympathy and support that the Icelanders had shown the Baltic nations. After the event, Nutt met with former Prime Minister David Oddsson and gave him a miniature Estonian flag to commemorate that exactly forty years have passed since Oddsson, then a young law student, translated a book by Swedish-Estonian author Anders Küng, Estonia. A Small Nation under Foreign Yoke into Icelandic. Oddsson was Prime Minister in the summer of 1991 when Iceland became the first state to re-recognise the independence of the Baltic states.

The meeting hall was full to the brink, the guests including the Polish Ambassador to Iceland, some university professors, members of parliament and former government ministers, old anti-communist stalwarts of Vardberg, and also some people from the large Polish community in Iceland. Dr. Asgeir Jonsson, lecturer of economics at the University of Iceland, Gudlaugur Thor Thordarson, member of parliament for the Independence Party, and Dr. Einar Stefansson, professor of medicine at the University of Iceland, contributed to the discussion after the two talks, before the exhibition was formally opened. Finally, RNH invited all the present to a reception on the National Library premises. One of the guests, Dr. Benedikt Johannesson, a mathematician and published of business reviews, blogged about the event. Vidskiptablaðið published a selection of photographs from the event, and the exhibition, 29 August. The National Library of Iceland, The Institute of International Affairs at the University of Iceland, and Vardberg, the Icelandic Atlantic Alliance, joined RNH in supporting and sponsoring this event.

Youtube has a short documentary about the comments of the two foreign guests, and a sample of photos on the exhibition: