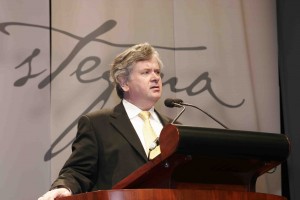 David Oddsson, Editor of Morgunbladid, was Governor of Iceland’s Central Bank during the collapse of the Icelandic banks on 7 October 2008, and before that Prime Minister and Foreign Minister in 1991–2005. Tuesday evening 7 October 2008 Governor Oddsson appeared in a famous television interview on Icelandic television (partly available here on Youtube with English captions) where he outlined a rescue plan for Iceland, which was to draw a fence around the Icelandic part of the banking sector, and to put its foreign part into receivership. While his advice was essentially taken, shortly thereafter Oddsson was driven out of office. Oddsson will be the speaker at the Freedom Dinner of RNH Monday night 7 October 2013 and discuss his political legacy, those fateful October days of 2008, as well as the actions taken by the British Labour government and the IMF concerning Iceland.

This is the third Freedom dinner held in Reykjavik, previous speakers having been, in 2011, Dr. Tom Palmer from Cato Institute in Washington DC, and in 2012, Dr. Matt Ridley, Viscount Ridley, an internationally renowned authority on science. As many more now want to attend than could be accommodated in the usual venue of Thingholt, the dinner has been moved to Bjortuloft in Harpa. Therefore a few seats are still available, at two prices, a champion price of 30,000 Icelandic crowns, and a student price of 15,000 crowns. Those interested in attending can contact Jonas Sigurgeirsson, the executive director of RNH, at jonas@bokafelagid.is The Freedom Dinner begins at 19.00 with a cocktail, and then going on to a four-course menu.