In 2009 the European Parliament decided to make 23 August a special memorial day for victims of totalitarianism, nazism and communism. This day was chosen because on that very day in 1939 Hitler and Stalin had made the non-aggression pact whereby they divided Central and Eastern Europe up between themselves, which in turn led to the outbreak of the Second World War. The two dictators took each one-half of Poland, but Finland and the three Baltic countries were to be Stalin’s even if he eventually had to settle for the Baltic countries in addition to his Polish conquests. RNH is a member institute of the Platform of European Memory and Conscience which was founded to keep up the memory of victims of totalitarianism in the 20th Century. 23 August 2013 RNH opened a photo exhibition on “Iceland and International Communism” at the Icelandic National Library, while Dr. Pawel Ukielski from Poland and Dr. Mart Nutt from Estonia described their countries’ totalitarian experience, under both nazism and communism. When the photo exhibition closed 16 September, Slovenian historian Dr, Andreja Valic Zver gave a paper about the need and the duty to remember. At the same time, the National Library’s Manuscripts Department received documents which Professor Arnor Hannibalsson—who had studied in Russia in the 1950s—had managed to find in Moscow after the fall of communism and which Professor Hannes H. Gissurarson had made use of in his 2011 book on Icelandic Communists 1918–1998.

RNH has a joint project with AECR, the Alliance of European Conservatives and Reformists, on “Europe of the Victims”. This year, RNH used the occasion of the Victims’ Memorial Day to donate to the National Library of Iceland many books on this subject, including a report from the Investigation  Commission in Estonia on crimes committed under nazism and communism, the two volumes work by Danish Professor Bent Jensen on Denmark during the Cold War and biographies of Czech writer Otto Katz (alias André Simone), German activist Willi Münzenberg and Danish politician Arne Munch-Petersen who all had some contact with the Icelandic communist movement and who all perished, Katz being hanged in Prague, while Münzenberg was killed by Soviet agents in a French forest and Munch-Petersen died of ill treatment in a Moscow prison. On Victims’ Memorial Day this year, 23 August 2014, Professor Hannes H. Gissurarson also published an article in Morgunbladid on the historical significance of the non-aggression pact, describing the misdeeds of Hitler and Stalin in Poland and the Baltic countries, the carefully planned extermination of Jews, mass deportations, arrests and executions: 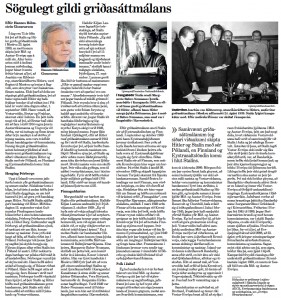