“The Soft and Gentle Can Survive the Hard and Violent” 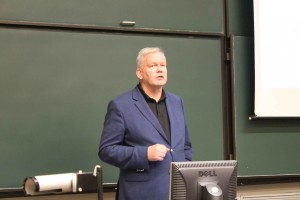 RNH’s Academic Director, Professor Hannes H. Gissurarson, gave four papers at Nordic conferences in August 2014. At the annual meeting of NOPSA, the Nordic Political Science Assocation, in Gothenburg in Sweden 12–15 August he discussed three topics. One of them was at a seminar on “International Courts and Domestic Politics”, directed by Johan Karlsson Schaffer. There Professor Gissurarson analysed the 2008–13 Icesave dispute between Iceland on the one hand and the UK and the Netherlands on the other hand and discussed the surprising hostility towards Iceland shown by the other Nordic countries in the dispute and the strange role assumed by the IMF, International Monetary Fund, as a bounty collector for the UK and the Netherlands. Professor Gissurarson described the many attempts to reach a deal in the dispute, the final decision of the EFTA Court and the impact of the case on domestic politics in Iceland. The opponent, Matthew Saul, a research fellow at Oslo University, commented that it was surprising how keen some Icelandic politicians seemed to have been to do a deal with the UK and the Netherlands instead of resorting to a court of law.

In the second place, Professor Gissurarson tried to answer the question at a seminar on “International Political Theory” directed by Göran Duus-Otterström why Iceland was, in the 2007–9 financial crisis, left out in the cold. He pointed out that small nations have usually been subdued by bigger ones: in international politics, often might is right. In the 20th Century, Iceland had mostly relied on the UK and the US for protection. However, in the autumn of 2008 Iceland found itself suddenly without any real allies. The US Federal Reserve System made dollar swap deals with the central banks of Sweden, Norway and Denmark, while refusing such a deal to Iceland. The UK government refused to include British banks, owned by Icelanders, in an immense rescue package for banks in October 2008, closing them down instead and even imposing an anti-terrorism law against one of them and briefly also against the CBI, Central Bank of Iceland, and against other Icelandic government institutions. The opponent, Aaron Maltais, a research fellow at Stockholm University, expressed doubts about whether the Icelandic banks could really be defended. They seemed to have been very reckless in their behaviour. Their rapid growth before their collapse had been absolutely unprecedented.

Thirdly, at a seminar directed by Anders Lindbom on “The Nordic Welfare Model in Transition”, Professor Gissurarson discussed the development of the Icelandic welfare state under the 1995–2004 market capitalism and the 2004–8 crony capitalism and then in the post-collapse years. He maintained that welfare benefits had remained generous in Iceland during the whole of this period, while income distribution had certainly become less even under the 2004–8 crony capitalism, characterised by an immense credit expansion. Professor Gissurarson pointed out that in 2004, at the end of the market capitalism era, poverty and social exclusion in Iceland were almost negligible and certainly much less prevalent than in almost all other European countries. His opponent, Stephan Köppe, research fellow at Dundee University, criticized Professor Gissurarson’s paper for not including a thorough description and analysis of the development of the Icelandic welfare system. The three Gothenburg papers formed a part of the joint project by RNH and AECR, the Alliance of European Conservatives and Reformists, on “Europe, Iceland and the Future of Capitalism”.

At the 28th Nordic Historians’ Congress in Joensuu in Finland 14–17 August 2014, Professor Gissurarson gave a lecture on the main theme of the Congress, “Crossovers—Borders and Encounters in the Nordic Space”, at a seminar chaired by Finnish historian Jouko Nurmiainen. The paper was on two Germans who both lived in Iceland before the Second World War. One of them, the nazi Bruno Kress, taught German and did research on Icelandic grammar, supported by Ahnenerbe, the SS “research” institute. The other, the Jewess Henny Goldstein, had fled to Iceland with her son and her mother after Hitler’s takeover in Germany and worked as a dressmaker. One of her two brothers succeeded in escaping to Iceland before the War, but the other one was killed at the notorious Natzweiler Camp after experiments that Ahnenerbe did on him and other Jews selected from Auschwitz in the grisly “Skeleton Case”. After the British occupation of Iceland in 1940, the German nazi was arrested and spent a few years in captivity on the Isle of Man, before being sent to Germany by his own choice under a prisoners-exchange programme. After the War, Dr. Kress became a communist in East Germany and was appointed Professor of Nordic Studies at the University of Greifswald. Mrs. Henny Goldstein married an Icelandic journalist, an ardent communist by the name of Hendrik Ottosson, and became an Icelandic citizen. These two—the Jewess who became an Icelander and the nazi who became a communist—met again in 1958, at the 60th birthday of the Icelandic communist leader Brynjolfur Bjarnason. Mrs. Henny Goldstein-Ottoson was upset at seeing again, and on this very occasion, the man whom she remembered from pre-war Reykjavik as a committed nazi. But the incident was hushed up. In mid-1986, Mrs. Goldstein-Ottosson passed away, a few months before Kress was awarded an honorary doctorate at the University of Iceland. Professor Gissurarson’s paper forms a part of the joint RNH and AECR project on “Europe of the Victims”.

Professor Gissurarson says that while the papers were on different subjects, their uniting theme was that the soft and gentle could survive the hard and violent. In the Icesave dispute, patience and perseverance had stood the Icelanders in good stead, and in the international arena, the totalitarian creeds had, despite all setbacks and disappointments, lost to democratic capitalism.