Professor Hannes H. Gissurarson, RNH Academic Director, described the joint project by RNH and AECR, “Europe of the Victims”, at the annual meeting of the European Platform of Memory and Conscience—of which RNH is a member institute—in Brussels 4–5 November 2014. Speakers at RNH meetings and conferences have included Professor Bent Jensen and Professor Niels Erik Rosenfeldt from Denmark, writer Anna Funder from Australia, Professor Stéphane Courtois from France, Member of Estonian Parliament Dr. Mart Nutt, Dr. Pawel Ukielski, Deputy Director of the Museum for the 1944 Warsaw Rising, and Slovenian historian Dr. Andreja Zver. RNH also has organised a photo exhibition in the National Library about the international links of the Icelandic communist movement, and book donations to the National Library, and the publication of an Icelandic translation of We the Living by Ayn Rand, her semi-autobiographical novel about life after the Bolshevik Revolution.

The next events in this joint project of RNH and AECR will be the online republication of books brought out by Icelandic defenders of democracy in the battle of ideas with the communists who were very influential in Icelandic cultural life in the 1940s and 1950s, not least because of generous financing by the Kremlin. Copies in paper will be printed to supplement the online editions. 9 November 2014, on the 25th anniversary of the fall of the Berlin Wall and the collapse of communism, the Black Book of Communism will be published online, the Icelandic translation having been published on paper in 2009.

Other books to be published online include The God That Failed by Arthur Koestler and others, Prisoner of Stalin and Hitler by Margarete Buber-Neumann, Service, Servitude, Escape by Aatami Kuortti, I Chose Freedom by Victor Kravchenko and Out of the Night by Jan Valtin, or Richard Krebs. Icelandic communists fiercely attacked the authors of these books, some of whom had been in Stalin’s prison camps, while others had witnessed communist oppression at first hand. Two famous novels on communism will also be published in the series, Nineteen Eighty Four by George Orwell and Darkness at Noon by Arthur Koestler. 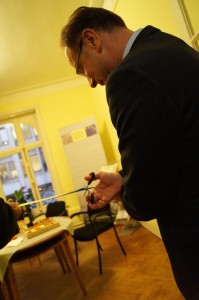 Also planned is the online publication in a book format of several articles from Icelandic newspapers and magazines. They include a series of articles on communism by renowned philosopher Bertrand Russell, a series of articles on Chinese communism by The Rev. Johann Hannesson, who served as missionary in China, speeches against communism made by distinguished Icelandic men of letters, such as poet Tomas Gudmundsson and writers Gunnar Gunnarsson, Gudmundur G. Hagalin and Kristmann Gudmundsson, and a series of articles on Soviet Russia by Arthur Koestler, hotly contested by the Icelandic communists before the municipal elections of 1946.  Professor Hannes H. Gissurarson who edits this series of books, says that the goal is twofold, to make these informative and interesting books available online to a new generation and to honour the memory of those Icelanders who fought the good fight against Twentieth Century totalitarianism. He writes a preface to each book and adds notes where necessary. Fridbjorn Orri Ketilsson is in charge of the digitisation of the books, and Sigurgeir Orri Sigurgeirsson of their design, while Hafsteinn Arnason provides editorial assistance on the online publishing.

Three European MEPs sponsored the Brussels meeting of the European Platform, László Tökés from Romania, Milan Zver from Slovenia and Sandra Kalniete from Latvia. During the meeting, the new Brussels office of the Platfom, in Rue Bélliard 197, was opened by Mr. Tibor Navracsics, EU Commissioner for Education, Culture, Youth and Sport, and Hungary’s former Foreign Minister. Six new institutions and organizations—from Slovenia, Czech Republic, Hungary, Ukraine and Slovakia—were admitted to the Platform at the council meeting.

The Members of the Platform, at their Brussels meeting, declared their support for the democratic forces in Russia. The Platform is especially concerned about the crackdown on the memory and human rights organization Memorial. Memorial is carrying out critical work researching the victims of the totalitarian Soviet Communist regime. “It is a tragedy,” the Members resolved, “that the present authoritarian leadership in the Kremlin is attempting to silence their voices. The Platform warns that the loss of historical memory endangers peace, prosperity, human rights, democracy and the rule of law and calls upon all Europeans to learn from the totalitarian past and stop the assault on democracy in Europe.”