Lukas Schweiger, ESFL Chairman, is farthest to the left of those holding the banner.

About 85 people attended the conference of the European Students for Liberty, ESFL, in Reykjavik Saturday 15 November 2014, including about 15 students from abroad. The Conference took place at the University Plaza on the University of Iceland premises. Lukas Schweiger, chairman of the ESFL Executive Board, gave an account of the origin and objectives of ESFL. Libertarian, or classical liberal, students are influenced by the analysis of F. A. Hayek in his “The Intellectuals and Socialism”: ultimately, ideas are conclusive, but they are created by original thinkers, then transmitted by intellectuals, shaping public opinion and conditioning political behaviour. Thus, what is crucial is not to influence individual politicians, but rather to organise a formidable, even if small, group of eloquent and thoughtful intellectuals who can change public opinion and facilitate the task of politicians sympathetic to liberty, while making more difficult the steady attempts by authoritarians to reduce liberty.

Economics Professor Birgir Þór Runólfsson, of the University of Iceland, pointed out that the economic case for government was that it had to produce certain public goods that individuals could not produce and price in their transactions. The clearest examples of public goods were defence and enforcement of law. However, in Iceland a Commonwealth had operated for more than three centuries, as anarcho-capitalist David Friedman had published an early informative paper on, with Professor Runolfsson writing his interesting doctoral dissertation on the institutions of the Commonwealth where many cases were solved in private transactions, such as payments or restitution for men killed in battles, and where the weak had some resources at their disposal, such as family alliances, transferable rights in court cases to stronger allies and the protection of their powerful chieftains. The Icelandic farmers could choose between chieftainships producing protection and legal enforcement of court decisions just as modern consumers can choose between many different insurance companies. 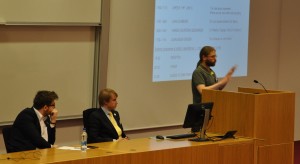 From left: Kokotevics, Schweiger and Gunnarsson.

Helgi Hrafn Gunnarsson, Member of Parliament for the rebel Pirate Party, formed by young people disillusioned with politics and socially liberal, participated in a panel with Serbian Student leader Aleksandar Kokotovic on the legalisation of recreational drugs. Mr. Gunnarsson explained the two arguments for legalising them. First, everybody was entitled to his or her own life and body, and others should not try to interfere with how he or she disposed of it, unless they had to defend themselves against harm inflicted upon them. In the second place the consequences of prohibiting many recreational drugs, some with positive medical effects, were worse than the consequences of allowing them. By criminalising harmless recreational behaviour, their production and distribution was forced underground, strengthening the mafias already engaged in crimes, while tying up the police force in pursuit of people who had only committed victimless crimes.

James W. Lark, Professor of Systems Management at the University of Virgina, described the libertarian movement in the US in which he has participated as the National Chairman of the Libertarian Party. He recognised that many libertarians are active in other parts or not political at all. By nature libertarians were sceptical of government power, whether abused by a majority against a minority or by a minority against a majority. Classical liberals who wanted to improve the world should try to get rich by selling better or cheaper goods and services  to the public than do their competitors. If rich, they could also support the libertarian battle of ideas, fought by a handful of libertarian intellectuals. 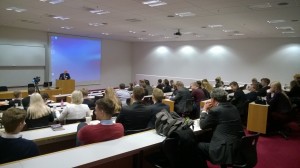 Politics Professor Hannes H. Gissurarson, of the University of Iceland, criticized the message of French philosopher Thomas Piketty who seemed to have replaced American philosopher John Rawls as the main guru of the left. The difference was that Rawls was concerned about poverty, which was indeed a recognizable social evil, whereas wealth had been regarded as a blessing, to be welcomed, if it was not ill-gotten, usually from government monopoly or protectionism. Piketty’s data had been severely criticized, but Professor Gissurarson said that that was not relevant to the main point: during the last few decades the income gap had indeed widened in the West in that the worst-off, or unskilled labour, were competing fiercely with their counterparts in China and India who could offer much lower wages, to the advantage of consumers. At the same time, people with exceptional skills, not easily reproducible: innovators, entrepreneurs, investors, top managers, entertainers, athletes, film stars and celebrities—Steve Jobs, Sam Walton, Warren Buffet, Jack Welch, Oprah Winfrey, Tiger Woods, Angeline Jolie, David Beckham and so on—were suddenly faced with a tenfold market for their services to that of their predecessors. Supply was fixed while demand greatly increased, resulting in much greater remuneration than previously, more rent being captured by the top income group. The common cause of both trends was globalisation. Moreover, Piketty overestimated the stability and certainty of capital held by individuals and underestimated the creative powers of capitalism to deliver economic growth.