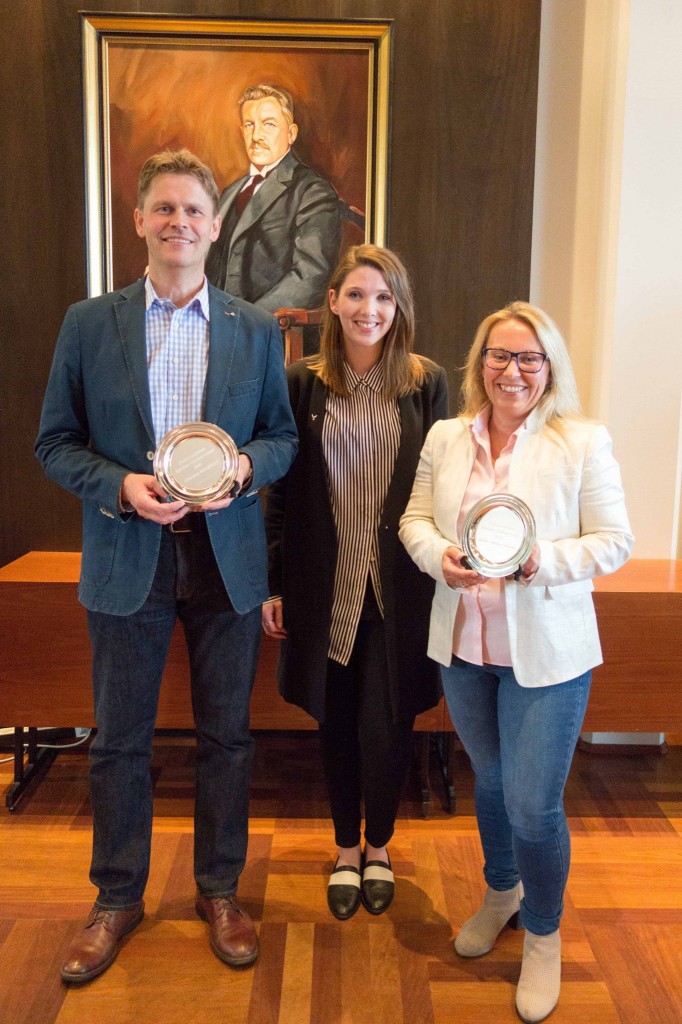 Jona, Laufey Run and Sigridur, under the watchful eyes of Jon Thorlaksson, the first leader of the Independence Party and a committed classical liberal.

AB (Almenna bokafelagid, The Public Book Club) received the 2016 Kjartan Gunnarsson Freedom Award, given by the Association of Young Independents, SUS, and named after lawyer Kjartan Gunnarsson, long executive director of the Independence Party and an untiring champion of freedom. Jonas Sigurgeirsson, AB executive director, received the award 21 July from Laufey Run Ketilsdottir, President of the Young Independents. It is given annually to one institution and one indidual who, in 2016, was Sigridur A. Andersen, who as member of parliament for the Independence Party has been an indefatigable frredom fighter in public life.

In his acceptance speech, Jonas Sigurgeirsson pointed out a problem that Icelandic publishers, struggling against odds on a very small market, had to face. It was that the state in Iceland, unlike most other Western countries, operated around a quarter of all publishing. A large government agency published textbooks for schools, and the state also produced audio editions of Icelandic books without any charge, allegedly for the blind, but in reality used by an increasing number of ordinary people in their cars and summer houses and on walking tours. Ms Andersen agreed that one of the most important tasks of the supporters of free enterprise was that agents in the marketplace could compete fairly.

In the last few years, AB has published many works for liberty and against totalitarian nazism and communism: In 2011, a 624 pp. history of the Icelandic communist movement 1918–1998 by Professor Hannes H. Gissurarson; and an analysis by journalist Sigurdur Mar Jonsson of the Icesave deals in 2009 and 2010, twice voted down in national referenda. In 2012, a translation of The Fountainhead by Ayn Rand. In 2013, a translation of Atlas Shrugged; and an analysis of the so-called “pot-and-pans revolution” in 2009 by historian Stefan Gunnar Sveinsson. In 2014, The Rational Optimist by science author Matt Ridley; a collection of scholarly papers on income distribution and taxation; and a translation of We the Living by Rand. In 2015, an analysis of scandals at the Icelandic Financial Services Authority by journalist Eggert Skulason; and reprints of three anti-totalitarian works, articles on communism by Bertrand Russell; memoirs by two women, Elinor Lipper and Aino Kuusinen, of Stalin’s prison camps; and Out of the Night, an account by Jan Valtin (Richard Krebs) of his time as a Comintern agent.

In 2016, AB has already published two books on European totalitarianism, Khruschev’s 1956 Secret Speech on Stalin and the account by Spanish Republican general Valentín González, El campesino, of his time in the Soviet Gulag. The next AB books will be reprints of two books on the Baltic countries, Baltic Eclipse by Ants Oras from 1955 and Estonia: A Study in Imperialism by Andres Küng from 1973, both with forewords and notes by Professor Hannes H. Gissurarson. They will come out 26 August 2016 when a quarter of a century has passed since Iceland was the first state to re-recognise the independence of the Baltic countries. At a publication reception, hosted jointly by AB and the honorary consuls in Reykjavik of the three Baltic countries, David Oddsson will make an address. It was he, as a young law student, who translated the book by Küng in 1973, and he was Prime Minister when the Baltic countries were re-recognised in 1991. As Prime Minister in 1991–2004 he also actively supported NATO membership of the Baltic countries. Distinguished guests are expected from the Baltic countries on this occasion. Another book soon to be published is Civilisation: The West and the Rest by Scottish historian Niall Ferguson. AB also plans to make the second part of Adam Smith’s Wealth of Nations available as soon as possible. The first part was published in 1997 in a superb translation by Thorbergur Thorsson. Historian Snorri G. Bergsson is writing two books for AB, on refugees in Iceland before the 2nd World War, and on the origin of the Icelandic communist party.