The summer school of the Association of free high school students in Reykjavik 8–10 July 2016 was very successful. About 30 people attended the school which was supported by RNH as a part of the project “Europe, Iceland and the Future of Capitalism” conducted with AECR, the Alliance of European Conservatives and Reformists. The school began with a reception at the home of Professor Hannes H. Gissurarson, RNH academic director, Friday 8 July, but it took place Saturday and Sunday at the Hitt husid in Posthusstraeti.

Saturday 9 July Professor Hannes H. Gissurarson spoke about the “Philosophy of Freedom”. He distinguished between eight different approaches to freedom, the centrist position of J. S. Mill and J. M. Keynes, the Austrian School: Mises and Hayek, the Chicago School: Friedman, Becker and Stigler, the property rights school: Demsetz and Coase, the strong theory of human rights espoused by Robert Nozick and the notion of the creative individual versus the parasite found in the novels of Ayn Rand. Professor Ragnar Arnason spoke about the “Economics of Freedom”. He stressed that he was speaking about negative freedom in Isaiah Berlin’s sense: the absence of constraints. Freedom was being able to do what one wanted to do. It could be demonstrated, Professor Arnason said, that in the free market the opportunities to do what one wanted to do were many more than elsewhere. 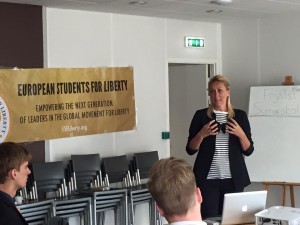 Jadranka Kaludjerovic speaks about the Austrians.

Federico Fernandez from the Austrian Economics Institute in Vienna spoke about the bankruptcy of socialism in Venezuela. He pointed out that some decades ago the country was one of the, if not the, richest country in Latin America, literally swimming in oil. But Hugo Chávez had taken power, nationalising companies and reducing freedom, with the consequence that the country was now one of the poorest on the continent. Shops were empty, schools were deteriorating, and many went hungry. This could not be blamed on lower oil prices because the price of a barrel had been around $10 when Chávez took over, but it was now around $40–50. Jadrana Kaludjerovic from Montenegro spoke about the Austrian economists whose arguments for the free market had been intellectually very powerful. Ludwig von Mies had refuted centralised economic planning. Friedrich A. Hayek had pointed out that the distribution of knowledge made the distribution of power necessary. And Joseph Schumpeter had coined the term “creative destruction” about the process under capitalism by which the less efficient was replaced by the more efficient.