Icelandic Nation Neither Guilty Nor Responsible 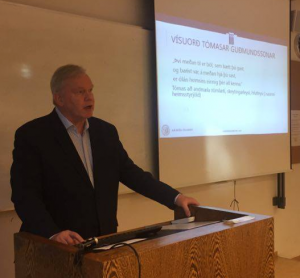 The Icelandic nation as a whole was neither guilty nor responsible when in 2008–9, at the height of the international financial crisis, it seemed that transactions between the private Icelandic bank Landsbanki and depositors in the UK and Netherlands—the owners of the so-called Icesave accounts—would fail. These were transactions between private parties who bore full responsibility for them. The Icelandic government fulfilled all its obligations by establishing, in compliance with European law, an Insurance Fund for Depositors and Investors. This was the conclusion by Professor Hannes H. Gissurarson, RNH Academic Director, at a lecture he gave 28 October 2016 at the annual research conference of the School of Social Sciences at the University of Iceland. He argued against three of his colleagues, Professors Thorvaldur Gylfason, Stefan Olafsson and Vilhjalmur Arnason, who had maintained that the Icelandic nation was morally responsible for the Icesave accounts and that it consequently should compensate the British and Dutch governments for outlays on which those governments had unilaterally decided, which would have resulted in the Icelandic Treasury paying a hefty sum in interest on “loans” from those two governments, as well as paying a part of the principal, if necessary. (At the time when the arguments took place it was estimated that the Landsbanki estate would only cover 75% of priority claims; it turned out later that it could cover all such claims.)

Professor Gissurarson cpntended that Professors Olafsson and Arnason had misunderstood the Icelandic Emergency Act of 6 October 2008. It had not involved any discrimination between domestic and foreign depositors in the Icelandic banks: Instead, it had given all depositors priority claims, over other creditors, to the estates of the failed banks. It was of no relevance to the case that at the same time Icelandic politicians had issued declarations that domestic accounts were safe. Such public declarations had been issued in many other European countries as well during the height of the crisis and had created no legal obligations.

Mr. David Miliband and Prof. Olafur Hardarson at the University of Iceland in 2012.

The Icesave case had not been one of collective responsibility by the Icelanders, according to Professor Gissurarson. The Icelandic government had fulfilled all its legal and political obligations and not committed any unjust acts against those British and Dutch depositors who had preferred the high interest rates offered by Landsbanki to other options of using their money. If there was any collective responsibility or guilt in the matter, it was that of the British Labour government which had, quite unnecessarily, imposed an anti-terrorism law on the Icelanders and closed two British banks, Heritable and KSF (both Icelandic-owned), at the same time as it had rescued all other British banks. Later it had emerged that both Heritable and KSF were much sounder than many of the banks which had been rescued. Possibly there was also some collective responsibility or guilt involved in the actions of hedge funds which had planned and performed runs on the Icelandic banks. Finally, Professor Gissurarson expressed his great surprise that the Foreign Minister of the government which had imposed an anti-terrorism law on the Icelanders, David Miliband, had, when giving a lecture at the University of Iceland in 2012, got away with prohibiting any discussion, let alone criticism, of the behaviour of the Labour government in the autumn of 2008.