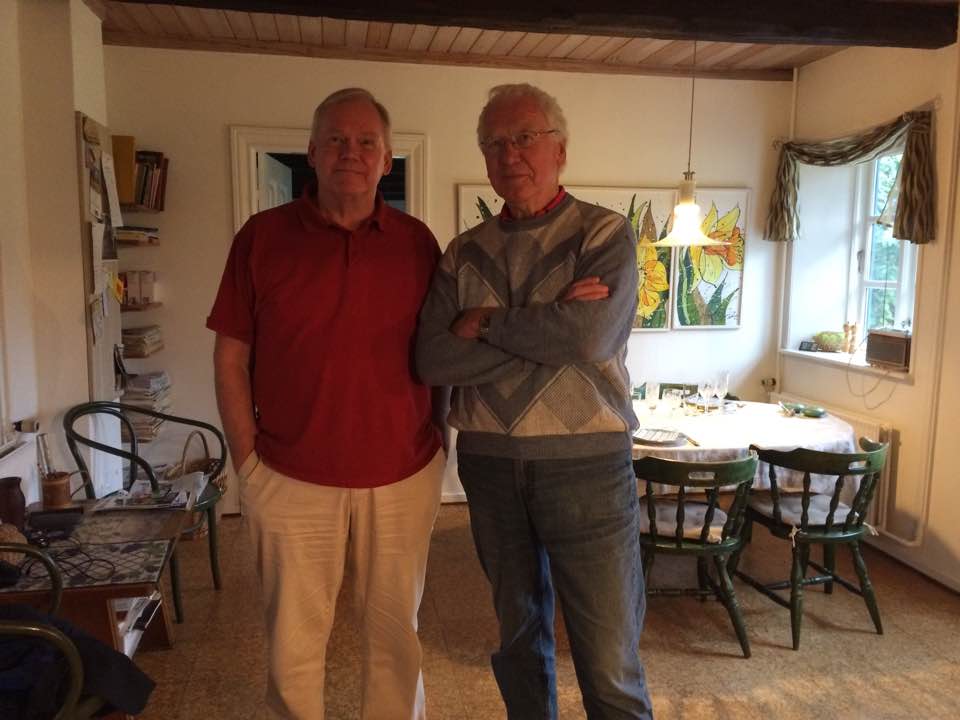 Gissurarson and Professor Jensen at the latter’s home 11 August 2017.

RNH Academic Director Professor Hannes H. Gissurarson gave a paper in a workshop on international relations at the Nordic Political Science Association Congress in Odense 8–12 August. The title of his paper was “In Defence of Small States”, where he argued against the doubts expressed after the 2008 Icelandic bank collapse by Professors Anne Sibert and Baldur Thorhallsson that Iceland was large enough to be sustainable as a state. Professor Gissurarson recalled similar doubts expressed by Rousseau, Marx and Engels and by Professor Alfred Cobban, before he turned to Sibert’s argument which was that small states were more costly to maintain than big ones. Gissurarson pointed out that this was not always true: Outlays per capita on public goods such as law and order and external security were actually lower in Iceland and the other Nordic countries than in the US or UK. The reason was that the small states were homogeneous, cohesive, transparent and non-aggressive, with a strong civic culture. The transparency in small states also reduced the likelihood of “hard” corruption such as extortion or bribery, although arguably there was scope there for clientilism and favouritism (which also could be observed, of course, in bigger states such as China, India and Brazil). Indeed, small states tended to be more wealthy than big ones, not least because their economies were open. The economic integration of the last half century had greatly benefited small states and perhaps paradoxically made political integration less necessary.

Professor Gissurarson discussed the “shelter theory” put forward by his colleague at the University of Iceland, Professor Thorhallsson, a former alternate MP for the Social Democrats and leading advocate of EU membership for Iceland. According to Thorhallsson Iceland needed a shelter such as the EU, not least after the US abandoned her. Gissurarson argued however that Icelandic history demonstrated quite the opposite. When the Icelanders thought they had gained a shelter under the Norwegian and later the Danish crown, they had actually been caught in a trap: The crown had isolated them, imposed monopoly trade on the country and worked with local landowners to stifle the development of fisheries. The result had been a series of famines on an island surrounded by fertile fishing grounds. The crown had cared little about Iceland, trying thrice to sell her to King Henry VIII and once to German Hansa merchants. In the 19th century, the Danish government had also seriously considered the idea of handing Iceland over to the Prussians in exchange for Northern Schleswig. When the Swedes had seized Norway in compensation for having to give Finland to the Russians, they had not bothered to include Iceland, even if she was an old Norwegian tributary.

Gissurarson pointed out that shelters were usually places of temporary relief from bad weather or danger. Therefore the concept was hardly applicable to fruitful cultural exchanges between nations of different sizes, or to mutual gains by trade for individuals and enterprises. The core of truth in the “shelter theory” was however that small states, with their limited military power, were vulnerable and needed alliances and even protectors. The military alliance between Iceland and the US in 1941–2006 when the US undertook to defend Iceland and maintained a base there had been successful. Iceland should, Professor Gissurarson submitted, seek to revive the alliance with the US and also to improve and strengthen the ties with her other North Atlantic neighbours, Norway, the UK and Canada. This did not mean that she should not pursue good relations with the EU which was indeed a very important trading partner. But the EU did not have the same military might as the US, and European political integration had probably reached its upper limit. Professor Gissurarson recalled that Jon Sigurdsson, the leader of Iceland’s independence struggle, had wanted to trade with many nations, not only with one.

A lively discussion, chaired by Danish Professor Anders Wivel, followed the paper. The commentator, Norwegian Professor Gunnar Fermann, expressed his satisfaction that this important issue was being actively debated in Iceland. He added that he himself shared many of the criticisms directed by Professor Gissurarson against the EU. Sverrir Steinsson, a graduate student who co-write a paper with Professor Thorhallsson on the “shelter theory”, stressed that the theory was independent of political views in Iceland on EU-membership and that perhaps in his critique, Professor Gissurarson had chosen some examples of outliers rather than more relevant data. Other participants wondered how a small state should be defined, whether a big nation supposed to give shelter to a small one would not require something in return, and if the real shelter which Iceland should seek would not be the Nordic community rather than the EU.

In Denmark, Professor Gissurarson used the opportunity to pay a visit 11 August to the distinguished historian Professor Bent Jensen who lives near Odense. In 2012, Jensen was the first lecturer to visit Iceland on the invitation of RNH. He has published several books about Stalin, Russia and the Stalinist apologists in the West, as well as a history of Denmark in the Cold War. Gissurarson and Jensen discussed how to remember the 100th anniversary of the Bolshevik Revolution in Russia 7 November 2017. It started the advance of communism which had claimed 100 million lives in the 20th century and still lingers on in North Korea and Cuba. From Denmark Professor Gissurarson went to England and paid a visit 14 August to Lord Mervyn King, former Governor of the Bank of England. Gissurarson interviewed Lord King about the international financial crisis and the 2008 Icelandic bank collapse on which he is preparing a report for the Icelandic Ministry of Finance. Gissurarson’s participation in the NOPSA conference and the meeting with Lord King formed a part of the joint project of RNH and ACRE, the Alliance of Conservatives and Reformists in Europe, on “Europe, Iceland and the Future of Communism”, whereas the meeting with Professor Jensen formed a part of the joint project of RNH and ACRE on “Europe of the Victims”.