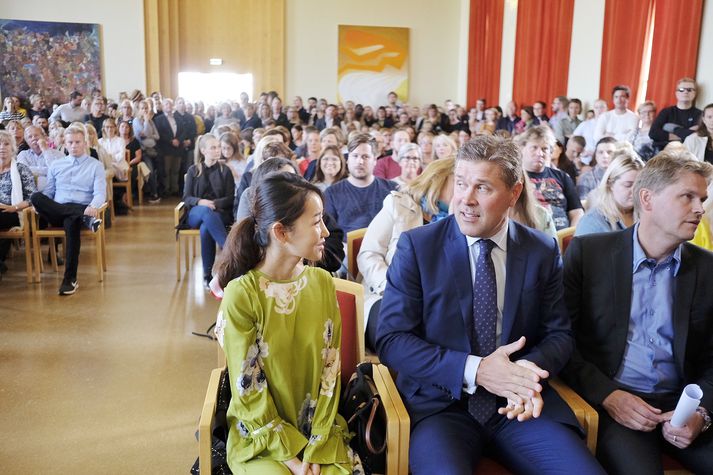 North Korean refugee Yeonmi Park gave a talk on “Life in North Korea” to a packed Festivities Hall at the University of Iceland Friday 25 August. Prime Minister Bjarni Benediktsson introduced Park, whose book In Order to Live has been a best-seller in Iceland for months. Park said that she found it hard to describe the situation in North Korea to foreigners. After the Second World War, the three Kims had one after the other reigned with utter ruthlessness, being treated as gods, with supernatural powers. She was therefore relieved to meet a friendly and unpretentious prime minister like the Icelandic one. In her own region in North Korea, as many people had lost their lives in the famine of the early 1990s as the whole population of Iceland, more than 300,000. She had been surprised when she had for the first time seen a dustbin abroad. In North Korea there were no dustbins: Everything was used. 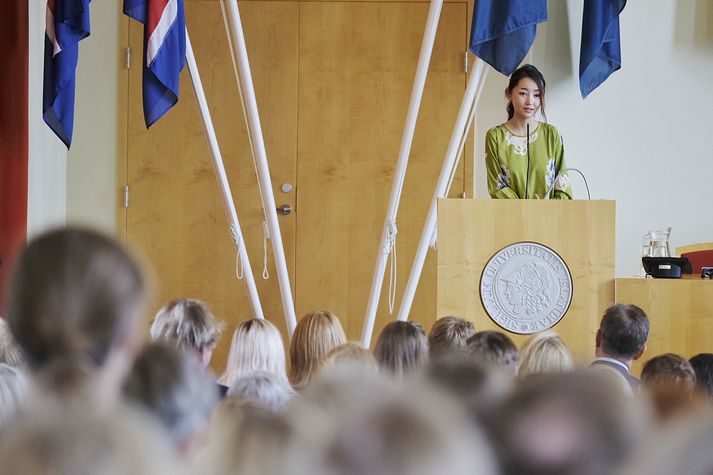 Park, soon to become 24 years, is a student at Columbia University.

In her talk, Yeomni Park described her escape with her mother ten years ago to China where they had been captured by human traffickers and sold as wives to Chinese workers. After two years of slavery and mistreatment in China they fled by walking over the Gobi Desert to Mongolia, eventually escaping to South Korea. It had been difficult for her to get used to the freedom in South Korea. For example, she had not known how to answer when she was asked about her favourite colour. In North Korea everybody was supposed to fancy red, as it was the colour of the revolution and the working class. North Koreans often found life in South Korea a challenge because they were used to obey and not to choose for themselves.

Vera Knutsdottir, Director of the United Nations Association in Iceland, chaired the following discussion. Yeonmi Park said that the key to future developments North Korea was to be found in China. The communist régime in North Korea still enjoyed the protection of the Chinese government. The liberation of North Korea had however to be made by the Koreans themselves and not by others. She did not consider it likely that North and South Korea would unify in the near future. The inhabitants of those two parts of Korea had grown apart, even formed different vocabularies. Yeonmi encouraged NGOs working for human rights to try and alleviate the plight of the North Koreans and asked the West, beset as it might be with problem, not completely to forget North Korea.

The meeting was held by RNH, the Public Book Club (Almenna bokafelagid), which had published Park’s book, and the Institute of International Relations at the University of Iceland. This very successful event formed a part of the joint project by RNH and ACRE, the Alliance of Conservatives and Reformists in Europe, on “Europe of the Victims: Remembering Communism”. The talk was streamed, both to the next rooms at the University and at the online site, visir.is. Around 5,000 people watched the streaming online. The event can also been watched here. Iceland’s main newspaper, Morgunbladid (The Morning Paper), wrote a leading article on Park’s visit and her message. An interview with Park was broadcast on the evening news magazine of the government television station 29 August.