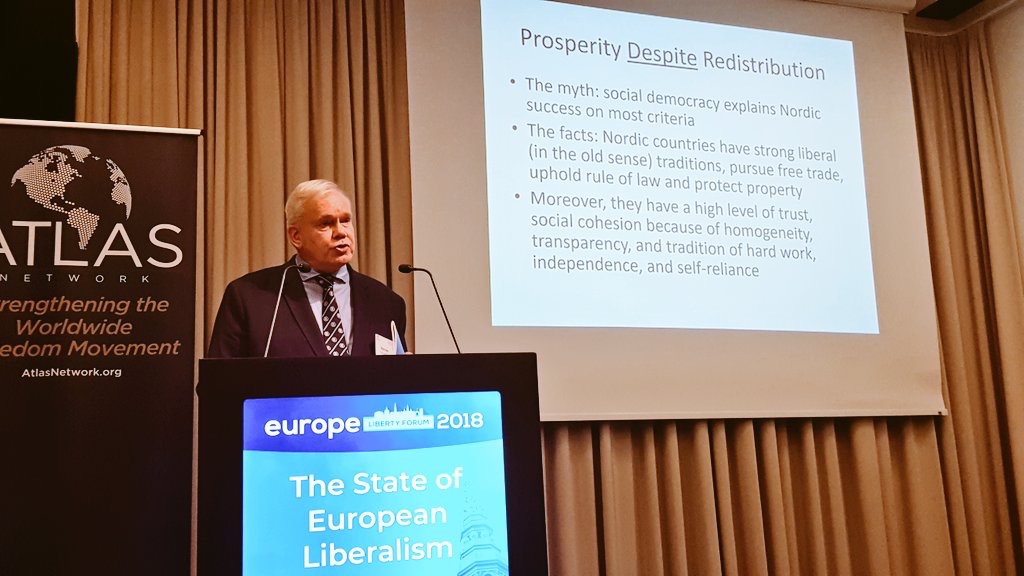 The relative success of the Nordic countries is despite and not because of the redistributive efforts of social democrats, Professor Hannes H. Gissurarson, RNH Academic Director, submitted at the European Liberty Forum, the Comwell Conference Center, in Copenhagen 30 May 2018. Gissurarson was launching his report, The Nordic Models, which Brussels free-market think tank New Direction published. There he describes the strong liberal tradition in Sweden: Finnish-Swedish priest Anders Chydenius explained, several years before Adam Smith, how the gain of one need not be the loss of others and how an order could arise without anyone issuing orders. In the 19th century, liberal statesman Johan August Gripenstedt greatly reformed Swedish society and economy, laying the foundations for its present prosperity. In the 20th century, renowned economists such as Eli Heckscher, Gustav Cassel and Bertil Ohlin argued for economic freedom. Liberalism (in its classical sense) was also influential in Denmark and Norway, as the constitution adopted at Eidsvoll in Norway in 1814 demonstrated. In Iceland, Jon Sigurdsson, leader of the Icelandic independence struggle, Arnljotur Olafsson, author of the first book on economics in Icelandic, and Jon Thorlaksson, Prime Minister and leader of the Independence Party, all supported economic freedom.

Gissurarson pointed out, however, that the Nordic success story was not unique. One might for example compare living standards in the five Nordic countries on the one hand and in northern states of the US and provinces of Canada, such as Manitoba, Minnesota and North and South Dakota, on the other hand. It emerged that GDP per capita was on average much higher in the ‘American Nordic countries’ than in the European Nordic countries.

Gissurarson said that Iceland, a tiny, remote country, had not contributed much to world civilisation, except perhaps three things: 1) The Icelandic Commonwealth of 930–1262 was a society under the law, but without government; the law was privately enforced; ingenuous solutions were provided to problems with which usually government were expected to deal. 2) The Icelandic fisheries, operating under a system of individual transferable quotas, were both sustainable and profitable, whereas fisheries in many other countries made huge losses, requiring large public subsidies, and often overexploiting fish stocks. 3) In the 2008 bank collapse, the Icelanders had hit on the principle of making deposits priority claims on the estates of banks. This principle might make it possible to abolish government guarantees of deposits which had caused much moral hazard in the financial sector.

Gissurarson’s report on The Nordic Models is now available online. His lecture in Copenhagen formed a part of the joint project of RNH and ACRE, the Alliance of Conservatives and Reformists in Europe, on “Europe, Iceland, and the Free Market”.

Gissurarson slides in Copenhagen 29 May 2018