On 7 April 2021, RNH Academic Director Professor Hannes H. Gissurarson was interviewed on television and radio on the occasion of his new book of 884 pages in two volumes, Twenty-Four Conservative-Liberal Thinkers, published in Brussels at the end of 2020 by the think tank New Direction. In Thjodmal, a television programme for subscribers to Morgunbladid, Gissurarson said to journalist Andres Magnusson that of the twenty-four thinkers in his new book he personally regarded Friedrich A. von Hayek as the most profound. He had reinforced the arguments for two seminal, yet little-understood ideas from Adam Smith: that one man’s profit did not necessarily mean another man’s loss; and that order could develop without anyone doing any ordering. Hayek had also strengthened the argument of Ludwig von Mises for the unfeasibility of socialism, pointing out that the dispersal of knowledge required the dispersal of power. Gissurarson added that an important message of his book was that the free market was a necessary and not a sufficient condition for a free society: what was indispensable was a moral foundation, respect for ancient traditions and virtues. 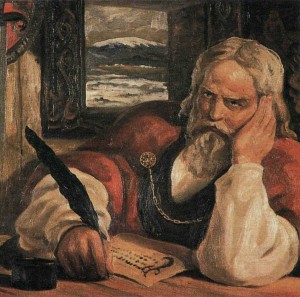 In The Mirror, a news-related radio programme of the government-owned National Broadcasting Service, Gissurarson explained to reporter Bogi Agustsson why he included Icelandic chronicler Snorri Sturluson in his book. Snorri had presented two medieval ideas which John Locke had developed further in his defence of the 1688 Glorious Revolution: that kings were subject to the same law as others and that they could be dethroned if they violated their unwritten contract with the people. In Heimskringla, Snorri described the conflict between the ancient law based on fellowship, Genossenschaft, and the modern law based on lordship, Herrschaft: this was essentially the contrast between law by common consent and royal decrees. In a famous speech by Einar from Thvera Snorri had in fact been expressing his own view that the Icelanders should be the king’s friends, not his subjects. Gissurarson noted that Snorri was also the author of a saga about poet-warrior Egil Skallagrimsson who had plausibly been called the first individual in a modern sense, having a rich emotional life, and asserting himself in a feud with the Norwegian royal family. One reason why the celebrated Icelandic sagas were written down, or perhaps composed, was that the Icelanders may have felt the need to redefine their identity as the Norwegian kings were trying to subdue them and to turn Iceland into a tributary. Gissurarson said that the evaluation of Snorri had to some extent been negatively influenced by his cousin, historian Sturla Thordson, a committed royalist.

In the Market, the televised business programme of Frettabladid, Gissurarson agreed with economic journalist Thordur Gunnarsson that a left-wing wave might be rising among young people. But this was a common tendency of any new generation, he observed, with the exception of the 1980s and 1990s when socialists everywhere had been almost incapicitated by the abysmal failure of socialism in Russia and China, at the same time as Thatcher and Reagan, inspired by Hayek and Milton Friedman, had implemented ambitious and successful programmes of liberalisation. When challenged about Friedman’s controversial theory on the social responsibility of business, Gissurarson expressed his agreement with Friedman. Company managers should not use the profits they were earning for their shareholders to subsidise causes they themselves personally liked. Instead they should pay out full dividends and allow individual shareholders to allocate their own money as they pleased. But of course business had to operate within the limits of the law, including the unwritten law of customs, traditions, habits, manners, and precedents.