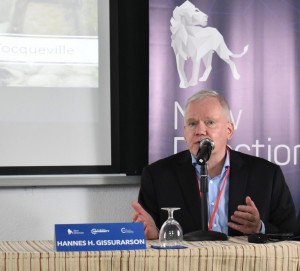 Modern conservatives and classical liberals, and most libertarians as well, are members of the same political tradition of the West, Professor Hannes H. Gissurarson argued at the Summer University of New Direction and Fundación Civismo in El Escorial near Madrid 14–19 June 2021. In two talks, on 14 and 18 June, Gissurarson discussed themes from his recent book in two volumes published by New Direction on twenty-four conservative-liberal thinkers, from Snorri Sturluson to Robert Nozick. Gissurarson pointed out that the ideas of government by consent and the right to rebellion were present in both the medieval thinkers he included in the book, Sturluson and St. Thomas Aquinas, although it was John Locke who presented the first systematic political theory in this tradition.

According to Gissurarson, conservative liberals supported the 1688 British Revolution and the 1776 American Revolution because they were made in order to preserve and extend existing liberties, whereas they opposed the 1789 French Revolution (as it evolved) and the 1917 Russian Revolution because they were made in order to reconstruct the whole of society by a small group of fanatics and to impose the values held by this group on the rest. The four leading principles of conservative liberalism were private property, free trade, limited government, and respect for traditions. Gissurarson said that in his opinion Friedrich A. von Hayek had offered perhaps the best synthesis of conservative insights and classical liberal principles with his theory of inevitable individual ignorance which could only be overcome by the discovery process of a free society.