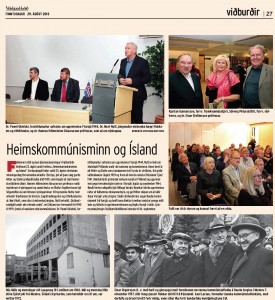 The photo exhibition which RNH organised 23 August to 16 September 2013 at the National Library of Iceland on “International Communism and Iceland”, in cooperation with the National Library and the Institute of International Affairs at the University of Iceland, has been widely reported. The government broadcasting service had an item about it in the evening television news 23 August, interviewing Dr. Mart Nutt, an Estonian member of parliament, who gave a lecture at the opening ceremony. The business newspaper Vidskiptabladid published 23 August an online interview with Dr. Pawel Ukielski, who gave a lecture at the opening ceremony. Vidskiptabladid also had a report 29 August on the photo exhibition, publishing some photos from it. Morgunbladid published a report 24 August on the exhibition, and an interview 9 September with Dr. Pawel Ukielski. In his two interviews in Iceland, Dr. Ukielski discussed the alliance of the communists and the Nazis during the first two years of 2nd World War, the Warsaw rising of 1944, the museum devoted to it, where he is deputy director, and his relationship with Lech Kaczynski, the President of Poland, who was very interested in keeping alive the memory of the victims of totalitarianism. Youtube has a short documentary, made by RNH, on the messages of Nutt and Ukielski and also with a sample of photographs from the exhibition. 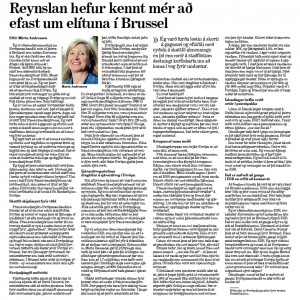 The meeting which RNH organised with Icewise 30 August where Marta Andreasen, former Chief Accountant of the European Commission, spoke also made the news. The government broadcasting service had an item about it in the evening television news 30 August, interviewing Andreasen. Morgunbladid had an interview with Andreasen 31 August and published her talk in an Icelandic translation 3 September. There, Andreasen said about her experience in Brussels: “The lack of transparency and control on how taxpayers’ money was being spent literally amazed me, but not as much as the steadfast resistance to work on any improvement.” Morgunbladid also wrote an editorial about Andreasen’s message 2 September. Andreasen’s talk was broadcast on the small private television station INN. It can also be found on Icewise’s website, on Youtube, and here: