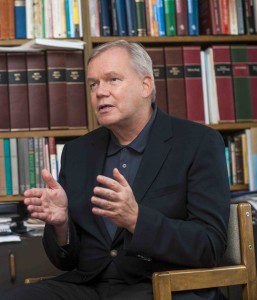 Photo: B. I. Gunnarsson

Professor Hannes H. Gissurarson, a member of the RNH Academic Council, gives a paper on the Icelandic bank collapse and lessons which European nations may draw from it, at a conference organised by the Lithuanian Free Market Institute, in Vilnius, the capital of Lithuania, 12 September 2013. In his paper, Gissurarson will discuss the characteristics of the Icelandic bank collapse and its specific causes, in addition to the main causes of the international financial crisis. These specific causes include two systemic risks in the Icelandic banking sector; one because of cross-ownership and the inflated value of collateral; and another one because of the asymmetry of the field of operations and field of institutional support. He will present his theories and investigations on why the American Federal Reserve System did not support the Icelandic Central Bank, at the same time as it made generous currency swap agreements with almost all other Western central banks outside the eurozone, and why the British Labour government closed the two Icelandic banks in England, on the very same day as it bailed out all other banks in England, and why the Labour government also used an anti-terrorism law against Icelandic companies and institutions, with the consequence that a total collapse of the financial sector became inevitable.

a part of the joint RNH-AECR project on “Europe, Iceland and the Future of Capitalism”. After the conference, Professor Gissurarson will participate in a seminar in Vilnius 13 September 2013 on free-market think tanks and their future agenda. In the evening of 13 September, Professor Gissurarson will give a talk at a meeting of young Lithuanian liberals (in the classical or European sense) in Vilnius. In his talk, “Three Liberal Thinkers: Hayek, Popper and Friedman”, he will discuss the personalities, ideas and arguments of these three major thinkers all of whom he knew quite well, through his studies at Oxford University in 1981–5, his participation in the Mont Pelerin Society meetings since 1980 and his Visiting Scholarship at the Hoover Institution at Stanford University in the 1980s and 1990s.